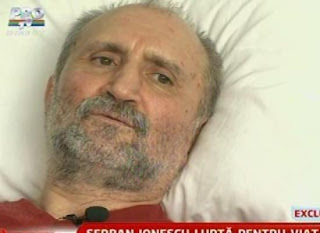 
Saturday, May 26, 11:00 at the Great Hall of the Bucharest National Theatre, the show
"Dinner with stupid"
will play for actor Serban Ionescu. All proceeds from the sale of the tickets to this show will be used to cover necessary treatment.

Actor Serban Ionescu’s tragedy: Immobilized by severe disease after being bitten by a tick

'Actor Serban Ionescu has been bed ridden for several months and the situation is likely to continue after he got a very serious disease from a tick. Lyme disease affected his entire body. Ionescu can no longer wash or feed himself on his own. He is helped by his family and he hopes that one day he will be able to get out of bed and back on stage.


An energetic man who is full of life, who used to walk 15 km every day, the actor found out last year he was suffering from Lyme disease, caused by a tick bite. Serban is a hunter and he says everything can happen in the woods.
The disease “attacks the nervous system, (…) it paralyzes your brain… this is the disease with 1,000 faces,” says the actor, who has both hands paralyzed.
Everything began last year, when his left shoulder became immobilized. Several tests and doctor visits followed until brain surgeons realized where his condition came from. “They showed me this thing which is the size of the tip of a needle. They put it under the microscope, It scared me, I thought it was an alien or something,” Ionescu said.
Without having lost his sense of humor, the actor talks about what he is going through: “I have lost my capacity to walk (…). My nerves and muscles were atrophied and my right hand is now just like my left hand, meaning that I am a former tree, a pole, a former tree with no more branches to support me.”
Ionescu is on strong antibiotics, a treatment he has to undergo six to eight months and costs about 9,000 lei a month.
Lyme disease is an infection transmitted by infected tick bites. The bacterium enters the blood flow and affects articulations, muscles, heart and nervous system. Those infected can become paralyzed. There are about 300 such cases reported nationwide every year.'

Oh ! Please take away the strength I call my own.

Lyme Disease is a particularly onerous affliction. I wish your Romanian actor strength of both body and mind in his battle to recover.