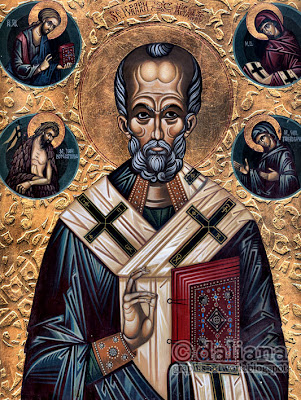 Happy Saint Nicholas Day!
The true story of Santa Claus begins with Nicholas, who was born during the third century in the village of Patara. At the time the area was Greek and is now on the southern coast of Turkey. His wealthy parents, who raised him to be a devout Christian, died in an epidemic while Nicholas was still young. Obeying Jesus' words to "sell what you own and give the money to the poor," Nicholas used his whole inheritance to assist the needy, the sick, and the suffering. He dedicated his life to serving God and was made Bishop of Myra while still a young man. Bishop Nicholas became known throughout the land for his generosity to the those in need, his love for children, and his concern for sailors and ships.

I had seen another bog devoted to this saint.In Prague, one of the oldest churches was named for this saint.

Happy Saint Nicholas for you too, Wind. Loved the story and the picture. Hugs from Brasil

Life is more pleasant when you encounter someone who remembers the reason Christmas came to be, where and why the story of Saint Nicholas began, and the purpose of the season.

Congratulations, Wind, on being someone who is not afraid to respect and to honor tradition, and to share knowledge about what is good and right in the world.

All the best and Happy Saint Nicholas Day to you to.

I've heard many versions of the Saint Nicholas tale, but not exactly like this. Interesting!

I LOVE jolly old Saint Nicholas! Christmas greetings to you, Wind, from Texas.

I wonder what we bring as a gift?Greetings Andrzej.

Happy St Nicholas day to you:)

A wish for this holiday, the 6th
of December Saint Nicholas and a
very peaceful new week!
Hugs from Monika..

Very Cool.
Hope you are having a nice season, Wind!
:) Be well!

Hi Wind, Wow... that is an outstanding drawing, there is so much character of care in the face and eyes. It also has a feel of a modern up to date "Book of Kells". If they ever do another one, I'll put your name forward :-)
Happy Saint Nicholas day, hope you spent time today doing things that you like ;-) ... and hope he is going to be good to you !!! regards from J